Automatic testing of your Pull Requests on GitHub and BitBucket using Xcode Server. Keep your team productive and safe. Get up and running in minutes. @buildasaur

Based on the "Testing" category.
Alternatively, view Buildasaur alternatives based on common mentions on social networks and blogs.

* Code Quality Rankings and insights are calculated and provided by Lumnify.
They vary from L1 to L5 with "L5" being the highest.

Do you think we are missing an alternative of Buildasaur or a related project?

Automatic testing of your Pull Requests on GitHub and BitBucket using Xcode Server. Keep your team productive and safe. Get up and running in minutes.

Buildasaur was designed to be easy to setup, while still giving you all the customization you need. By choosing the right defaults, most teams can get Buildasaur set up in minutes, start it and never have to worry about it again.

Buildasaur runs as a background Mac app, its configuration window goes away when you don't need it. This gives you a chance to quickly peek at the status of your syncers from the menu bar.

Xcode Server ships in Xcode, so the server API is also dependent on the Xcode you have. See the table of latest Buildasaur versions supporting each Xcode version.

The default workflow is as follows: 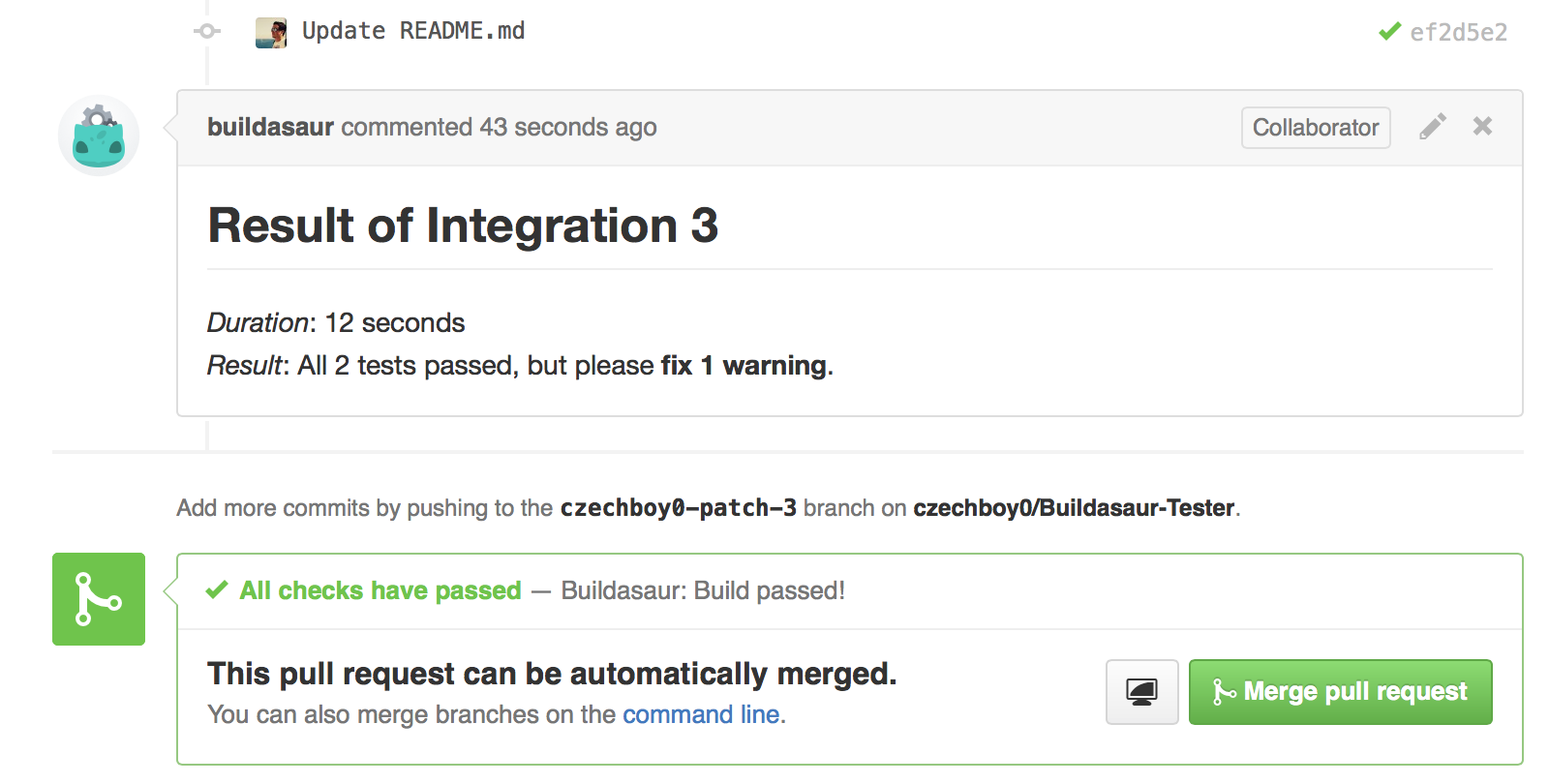 In addition to automatic bot management with syncers, you can create bots from an existing Build Template and a branch by clicking Manual Bot Management when your syncer is setup. This is useful for creating one-off bots based on e.g. release branches with a different Build Template than you use for PRs.

All branches with open Pull Requests are automatically watched and tested. However, what if you wanted to watch a branch which does not have a Pull Request associated with it? Like master, or a release branch into which you're making final changes and want tested?

Buildasaur supports that. You can select extra watched branches that will automatically be tested and their statuses will be updated on GitHub. You can see the statuses of Buildasaur's branches here, for instance.

Enabling watched branches is a prerequisite of getting build badges working with satellite.

Note that Branch Watching is only supported for GitHub-hosted projects.

I built a tiny service called satellite, which serves down badges based on GitHub status of a branch. And this status is automatically updated by Buildasaur when a build finishes (enable a watched branch in Buildasaur for whichever branch you'd like to base your badge on, usually master).

TL;DR? Just add this to your README and replace USER, REPO and BRANCH with your info. And you'll get a build badge like this:

If you don't specify a branch, master will be used.

In order to understand how many Buildasaur instances are actively being used (which helps me to decide how much free time I should dedicate to this project), one anonymous heartbeat event is sent from Buildasaur every 24 hours (and one when Buildasaur is launched). There is absolutely no information about your projects being synced with Buildasaur (I don't care about that, that's your business), the event just sends a randomly generated identifier (to discern between different Buildasaur instances), the uptime of Buildasaur (to potentially detect crashes) and the number and type of running syncers.

I wrote the server storing this data myself - and it's open source, so feel free to take a peek yourself at how that's done. And take a look here to see exactly what data is being sent.

Despite absolutely no identifiable data being sent, if you still aren't comfortable allowing Buildasaur to send its heartbeat, add "heartbeat_opt_out" = true to ~/Library/Application Support/Buildasaur/Config.json. But please keep in mind that if you do that, it will make me think fewer people are in fact using Buildasaur, which might just lead to me spending less time on improving it.

If Builda crashes, you can find crash logs at ~/Library/Logs/DiagnosticReports/Buildasaur-*. Please let me know if that happens and I'll take a look. Also, Builda logs (pretty verbosely) to ~/Library/Application Support/Buildasaur/Logs, so this is another place to watch in case of any problems. You can find all persisted files that Buildasaur keeps around at ~/Library/Application Support/Buildasaur/, which is also what you might want to back up or migrate if you're moving your setup between machines.

Version 0.8.0 adds Crashlytics, so I receive crash reports. If you prefer to opt-out of crash reporting, you can do so by adding "crash_reporting_opt_out" = true to ~/Library/Application Support/Buildasaur/Config.json.

The code for communication with Xcode Server lives in a project called XcodeServerSDK.

Please note that this project is released with a [Contributor Code of Conduct](./CODE_OF_CONDUCT.md). By participating in this project you agree to abide by its terms.

Please create an issue with a description of your problem or a pull request with a fix. Or, if you just want to help out, take a look at issues with the label "up-for-grabs", comment on the issue that you're working on it and let's improve Buildasaur together!

If you would like to be part of the Buildasaur community; feel free to join our Slack Team here.


*Note that all licence references and agreements mentioned in the Buildasaur README section above are relevant to that project's source code only.

Do not miss the trending, libraries, news and articles with our weekly report.