Based on the "Events" category.
Alternatively, view Katana alternatives based on common mentions on social networks and blogs.

Scout APM uses tracing logic that ties bottlenecks to source code so you know the exact line of code causing performance issues and can get back to building a great product faster.
Sponsored scoutapm.com

Do you think we are missing an alternative of Katana or a related project?

Katana is a modern Swift framework for writing iOS applications' business logic that are testable and easy to reason about. Katana is strongly inspired by Redux.

In few words, the app state is entirely described by a single serializable data structure, and the only way to change the state is to dispatch a StateUpdater. A StateUpdater is an intent to transform the state, and contains all the information to do so. Because all the changes are centralized and are happening in a strict order, there are no subtle race conditions to watch out for.

We feel that Katana helped us a lot since we started using it in production. Our applications have been downloaded several milions of times and Katana really helped us scaling them quickly and efficiently. Bending Spoons's engineers leverage Katana capabilities to design, implement and test complex applications very quickly without any compromise to the final result.

We use a lot of open source projects ourselves and we wanted to give something back to the community, hoping you will find this useful and possibly contribute. ❤️

Your entire app State is defined in a single struct, all the relevant application information should be placed here.

The app State can only be modified by a StateUpdater. A StateUpdater represents an event that leads to a change in the State of the app. You define the behaviour of the State Updater by implementing the updateState(:) method that changes the State based on the current app State and the StateUpdater itself. The updateState should be a pure function, which means that it only depends on the inputs (that is, the state and the state updater itself) and it doesn't have side effects, such as network interactions.

The Store contains and manages your entire app State. It is responsible of managing the dispatched items (e.g., the just mentioned State Updater).

You can ask the Store to be notified about every change in the app State.

Updating the application's state using pure functions is nice and it has a lot of benefits. Applications have to deal with the external world though (e.g., API call, disk files management, …). For all this kind of operations, Katana provides the concept of side effects. Side effects can be used to interact with other parts of your applications and then dispatch new StateUpdaters to update your state. For more complex situations, you can also dispatch other side effects.

Side Effects are implemented on top of Hydra, and allow you to write your logic using promises. In order to leverage this functionality you have to adopt the SideEffect protocol

Moreover, you can leverage the await operator to write logic that mimics the Async/Await pattern, which allows you to write async code in a sync manner.

In order to further improve the usability of side effects, there is also a version which can return a value. Note that both the state and dependencies types are erased, to allow for more freedom when using it in libraries, for example.

Note that, if this is a prominent use case for the library/app, the step 0 can be encapsulated in a protocol like this:

The side effect example leverages an APIManager method. The Side Effect can get the APIManager by using the dependencies parameter of the context. The dependencies container is the Katana way of doing dependency injection. We test our side effects, and because of this we need to get rid of singletons or other bad pratices that prevent us from writing tests. Creating a dependency container is very easy: just create a class that conforms to the SideEffectDependencyContainer protocol, make the store generic to it, and use it in the side effect.

When defining a Store you can provide a list of interceptors that are triggered in the given order whenever an item is dispatched. An interceptor is like a catch-all system that can be used to implement functionalities such as logging or to dynamically change the behaviour of the store. An interceptor is invoked every time a dispatchable item is about to be handled.

Katana comes with a built-in DispatchableLogger interceptor that logs all the dispatchables, except the ones listed in the blacklist parameter.

Sometimes it is useful to listen for events that occur in the system and react to them. Katana provides the ObserverInterceptor that can be used to achieve this result.

In particular you instruct the interceptor to dispatch items when:

Note that when intercepting a side effect using an ObserverInterceptor, the return value of the dispatchable is not available to the interceptor itself.

What about the UI?

Katana is meant to give structure to the logic part of your app. When it comes to UI we propose two alternatives:

Katana is automatically integrated with the Signpost API. This integration layer allows you to see in Instruments all the items that have been dispatched, how long they last, and useful pieces of information such as the parallelism degree. Moreover, you can analyse the cpu impact of the items you dispatch to furtherly optimise your application performances. 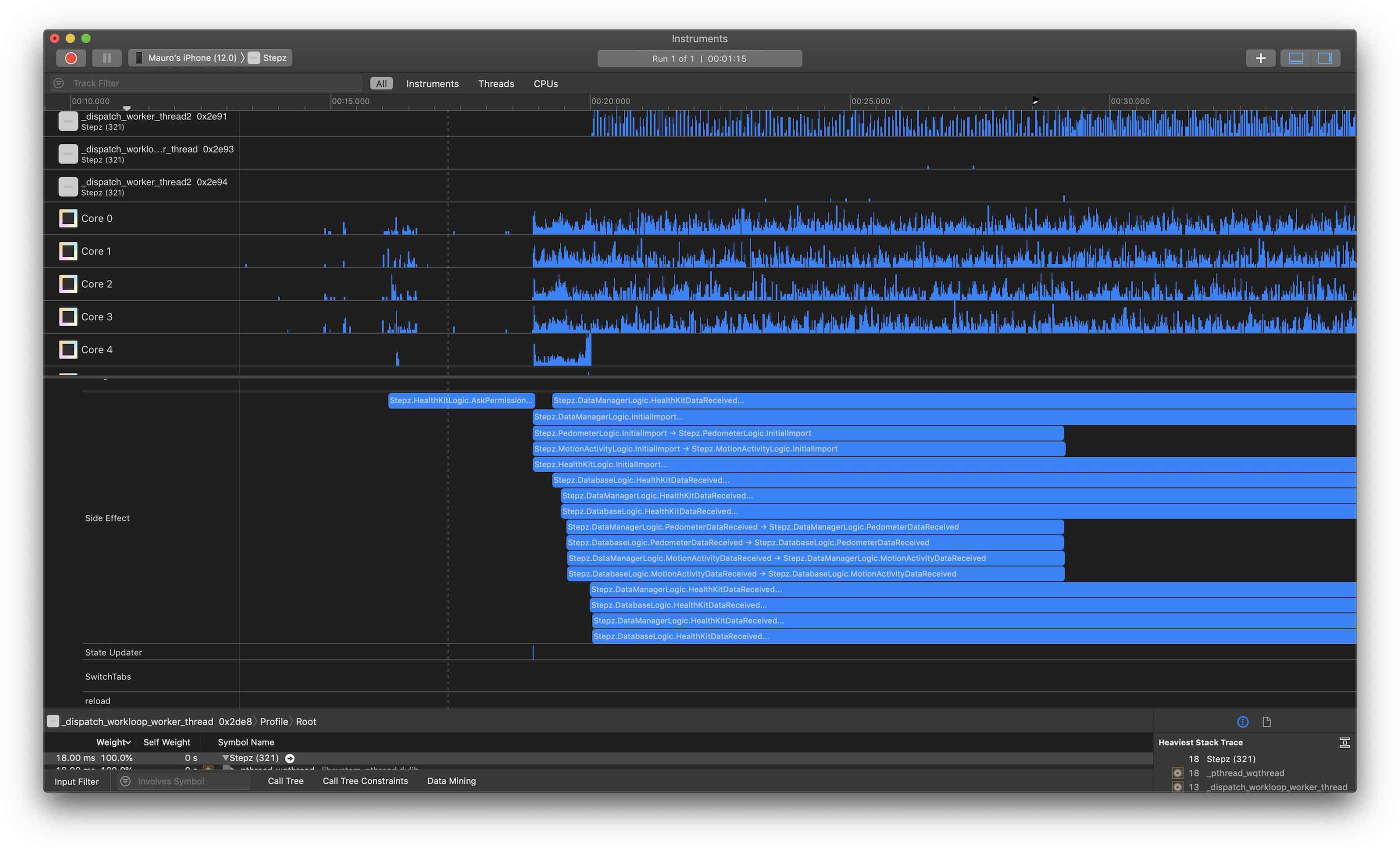 In Bending Spoons, we are extensively using Katana. In these years, we've defined some best pratices that have helped us write more readable and easier to debug code. We've decided to open source them so that everyone can have a starting point when using Katana. You can find them here.

We strongly suggest to upgrade to the new Katana. The new Katana, in fact, not only adds new very powerful capabilities to the library, but it has also been designed to be extremely compatible with the old logic. All the actions and middleware you wrote for Katana 2.x, will continue to work in the new Katana as well. The breaking changes are most of the time related to simple typing changes that are easily addressable.

If you prefer to continue with Katana 2.x, however, you can still access Katana 2.x in the dedicated branch.

In Katana, the concept of middleware has been replaced with the new concept of interceptor. You can still use your middleware by leveraging the middlewareToInterceptor method.

Where to go from here

Give it a shot

Check out the documentation

You can also add Katana to Dash using the proper docset.

Katana is available through CocoaPods, Carthage and Swift Package Manager, you can also drop Katana.project into your Xcode project.

Swift Package Manager is a tool for managing the distribution of Swift code. It’s integrated with the Swift build system to automate the process of downloading, compiling, and linking dependencies.

There are two ways to integrate Katana in your project using Swift Package Manager:

In both cases you only need to provide this URL: [email protected]:BendingSpoons/katana-swift.git

CocoaPods is a dependency manager for Cocoa projects. You can install it with the following command:

To integrate Katana into your Xcode project using CocoaPods you need to create a Podfile.

Now, you just need to run:

Carthage is a decentralized dependency manager for Cocoa projects. You can install Carthage downloading and running the Carthage.pkg file you can download from here or you can install it using Homebrew simply by running:

To integrate Katana into your Xcode project using Carthage, add it to your Cartfile:

Then drag the built Katana.framework into your Xcode project.

Katana is available under the MIT license.

Katana is maintained by Bending Spoons. We create our own tech products, used and loved by millions all around the world. Interested? Check us out!


*Note that all licence references and agreements mentioned in the Katana README section above are relevant to that project's source code only.